A Twitter argument between Ariana Grande (Pete's ex fiance) and Kanye West was what provoked the social post from Pete.

Kanye West blasted Drake earlier this week on Twitter, alleging the fellow rapper had 'threatened' him and was "disrespectful to all people with mental health conditions".

During the stoush, Grande wrote, in a since-deleted Tweet: "Guys, I know there are grown men arguing online rn but Miley and I dropping our beautiful, new songs tonight so if y'all could please jus behave for just like a few hours so the girls can shine that'd be so sick thank u."

But Davidson wasn't happy with his ex's come down of Kanye.

Pete took to Instagram saying that it wasn't easy to talk about mental health, and appeared to take a jab at his ex in the process.

"Bravo Kanye West for standing up for yourself and speaking out against mental health. I can't explain to you enough how difficult and scary it is to be honest about stuff like this," Davidson wrote.

"We need people like Kanye. No one should ever point fingers at you for your bravery in speaking about mental health. I'm seriously disgusted."

But he followed this up just a few minutes later with an alarming post. 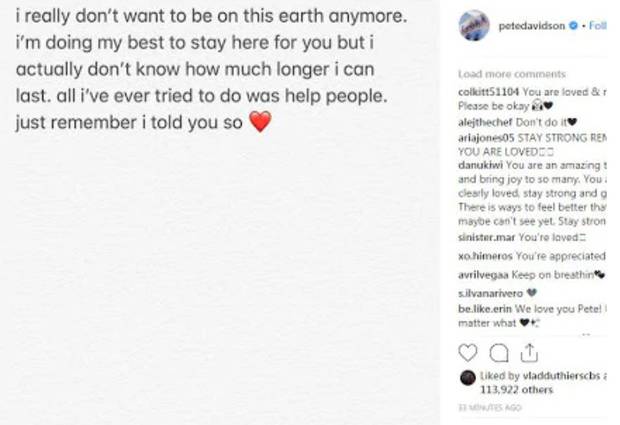 "I really don't want to be on this Earth anymore. I'm doing my best to stay here for you but I actually don't know how much longer I can last. All I've ever tried to do was help people. Just remember I told you so," Davidson wrote, before deactivating his Instagram account.

Davidson has previously talked about his struggles with borderline personality disorder.

Many celebrities and fans took to Twitter to support Pete.

"Pete Davidson ... hang in there. There is a lot of help out here. Surrender to some love some where around you ... today! Right now! And then ... let in the help that will become available. I'm praying for you Pete. I've been there. It gets better," Will Smith's wife, Jada Pinkett Smith wrote.

Pete Davidson ... hang in there. There is a lot of help out here. Surrender to some love some where around you ... today! Right now! And then ... let in the help that will become available. I’m praying for you Pete. I’ve been there. It gets better.

"I know Ariana said this to be cool and didn't mean no harm but I don't like even slightest level of slight commentary from someone I know loves and respects me," West tweeted.

I know Ariana said this to be cool and didn’t mean no harm but I don’t like even slightest level of slight commentary from someone I know loves and respects me pic.twitter.com/T9VXaIj9MX

"All of this foolishness weighed on my mental health so @ArianaGrande you know I got love for you but until you're ready to really make sure everyone's ok don't use me or this moment to promote a song."

Grande responded, saying: "With all due respect, I don't need to use anyone to promote anything. Period. I was making a comment [about] what men were doing at the time vs. women."

"It was a joke which I understand now was probably insensitive. I apologize if I was in any way triggering and hope you feel well today."

Shortly after Davidson's post, the New York Police Department confirmed that it had conducted a wellness check and made contact with Davidson. Fellow star Jon Cryer also tweeted that the star was on set for SNL and "accounted for".

Ariana seemed to even visit the set of SNL to check on Pete.

She tweeted: "Man i'm so sorry i told a dumb joke. i really didn't mean any harm. all i want everyone to be healthy and happy. so desperately. please. my god."

She then quickly followed up, tweeting: 'I'm downstairs and I'm not going anywhere if you need anyone or anything. I know u have everyone u need and that's not me, but i'm here too."