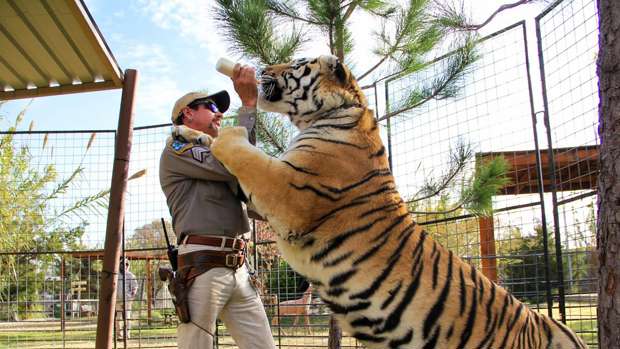 A new episode of the popular Netflix series Tiger King: Murder, Mayhem and Madness is set to be released next week.

The news was shared by Justin Turner, an American professional baseball player and huge Tiger King fan, who tweeted a video featuring one of the colourful cast of the hit show, zoo owner Jeff Lowe.

So our friend @christie_dish listened to the podcast, @HoldingKourt and after last weeks episode decided to send us this!!!

There will be 1 more episode of #TigerKing [email protected] pic.twitter.com/YeRSIlDKTJ

"Hey Kourtney and Justin, this is Jeff and Lauren from the Tiger King show on Netflix. Thanks for watching our show," Lowe said in the video.

"Netflix is adding one more episode. It will be on next week. We're filming here tomorrow."

Lowe signs off by sharing some timely advice to stay healthy during the current Covid-19 pandemic, telling Turner to "stay safe, and put your mask on".

You can watch Tiger King, now, on Netflix!

This article was taken from an article on nzherald.co.nz and republished with permission.