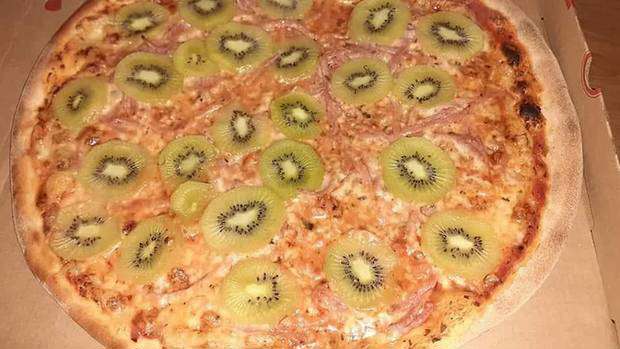 Forget pineapple on pizza, we have a contender for the worst pizza combo!

A tourist in Denmark has taken to social media to post what could possibly be the most controversial pizza since former New Zealand Prime Minister Bill English went viral over his spaghetti creation.

Posting to Reddit, the tourist claims he was served a kiwifruit pizza from a Danish pizzeria, labelling it "an unholy abomination".

The pizza featured 27 pieces of kiwifruit, cheese, and what looks to be a tomato paste base on homemade pizza dough.

Kiwi pizza from a Danish pizzeria, an unholy abomination from r/shittyfoodporn

Kiwis (the people, not the fruit) have responded to the unusual creation with many believing it is a step too far.

"This makes me unreasonably angry," another wrote.

One outraged pizza lover added: "Everyone talks crap about pineapple. But THIS is wrong on soooooo many levels I've lost count."

"Every day we stray further from what Italians consider a pizza."

But not everyone has opposed the idea, with a number of Kiwis willing to give the creation a fair crack.

"I could almost taste the combined flavours of the cheese and kiwi— its saltiness and its sweetness and tartness respectively. Like it could be a good flavour combination much like that of cheese and grapes or berries," one explained.

So what do you think??